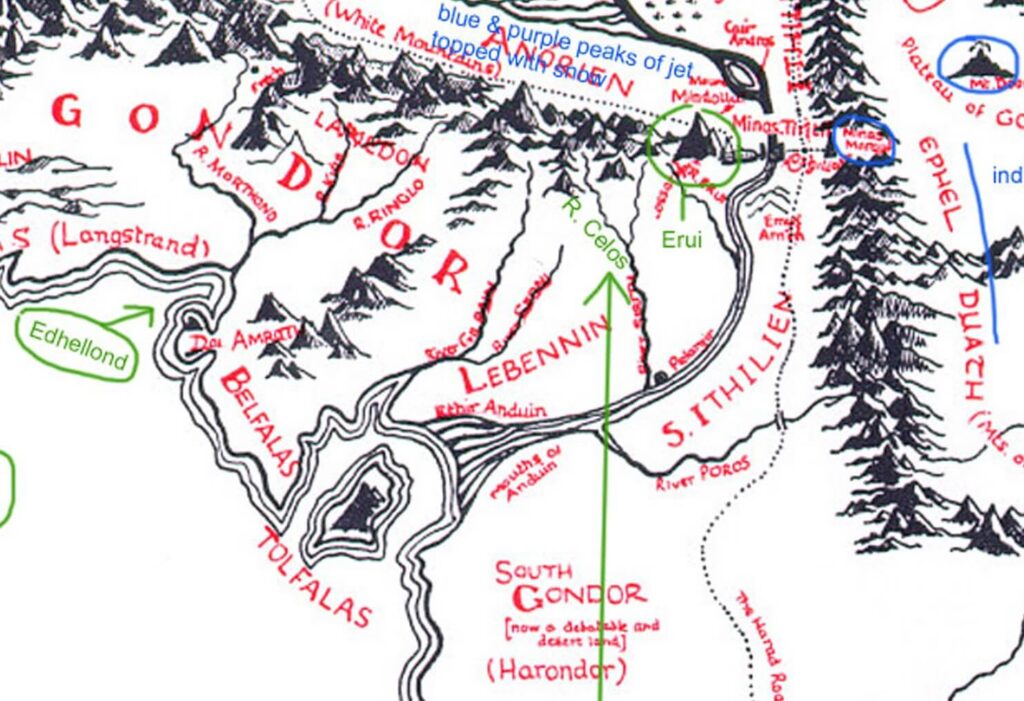 When this article began its journey, we saw that some parts of Middle-earth have strange similarities to our own good, green earth. 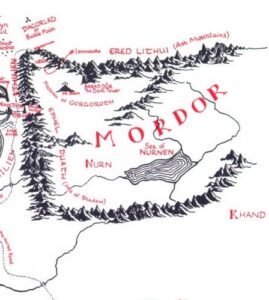 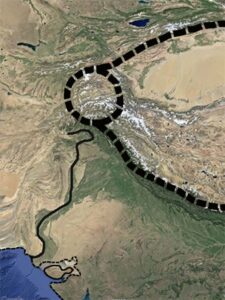 It became weirder when despite what we always thought about Tolkien’s own words about Middle-earth inspirations, they were not all in Europe, but in unexpected places. The first article included maps from the heart of Asia: of the Himalayas, the Pamirs, and places in India and Pakistan.

Naturally, questions will come after such a claim. Questions about the accuracy of this claim and evidences supporting it, also more important questions of this kind: Why would Tolkien do this? Why use real maps in his fantasy world? Those are right and fair questions that I think are better answered gradually while studying maps to understand the subject better and avoid misunderstanding.

There is an urgent question to answer: if Professor Tolkien borrowed parts of his world from our real world, does that mean he could not create a fantasy world on his own? Wouldn’t that be essentially accusing him of a lack of creativity? The short answer is no, but let me explain. Writing a fantasy book like The Lord of the Rings is not as easy as writing a poem, an essay, or a novel. A non-fantasy story usually has characters and locations that are not hard for a reader to imagine, such as a white, two-story house with a gable roof. Add a tall man in a raincoat standing behind the door and instantly the images form in one’s mind.

But when you write: “In a hole in the ground there lived a hobbit,” you have to explain what a hobbit is, the shape of the hole, and how is it possible to live in a hole. It isn’t a big deal if this hobbit just stays in his hole, but if he goes on dangerous quests in an unknown world full of different races and creatures, that is a different matter. When you add in wars, conquests, land changings, and terrible natural disasters, now your story needs locations, buildings, languages, vehicles, dresses, weapons and tools, flora and fauna—perhaps including several tobacco brands. That means you have to invent many of these things. In this case, the story you are struggling with is not just a literary work; it is a literary project requiring strong storytelling and character development, along with a detailed knowledge of History, Geography, Mythology, Architecture, Philology, and even sciences like Geology, Botany, and Zoology. This does not mean the writer needs to have an academic education in all those disciplines, but at least has to have a working knowledge of them to make a believe-able world. Creating a realistic and desirable fantasy world is not an easy work at all, and Professor Tolkien certainly had a difficult job making his imaginary yet serious story’s strange creatures and spaces come alive.

Now I’m claiming that Tolkien borrowed some parts of his maps and backgrounds from our real world, not from his own imagination. Why would he do that—to escape some of the creative troubles I just described? No, far from it, in fact.

Basing a fantasy world upon the writer’s imagination is so much easier than making it with help of real world maps. If you are planning to use imaginary maps and locations in a fantasy world, we saw that you have a difficult job to do. But if you intend to place some parts of our real world into your fantasy world, it will be even harder for the simple reason that you’re losing control over your maps and stories. In the first case you can easily place your mountains, rivers, or cities wherever your story needs them as long as they don’t violate the internal logic of your story. You don’t need to worry about matching it with earthly geographical, geological, or hydrological facts. You can design your map upon your story’s events and add your imaginary world’s map to your book. But if you’re planning to place real maps and locations into your fantasy—the way I think Tolkien did with his—you give yourself a much greater challenge.

Unlike the first case, you need to adjust your story with maps, not just maps with story. It doesn’t mean that maps will change your entire story, but the geographical facts will force you to consider them. At least you have to take them as seriously as you do your story, and that is not easy at all. Mountains, rivers, or lakes may well end up changing the path of your heroes or even change war plans.

If I am right, Tolkien made big trouble for himself by choosing this method. He lost control of some parts of his story to the natural phenomena of lands in Asia and had to make changes in his story to fit with the situation of the region. Maybe Tolkien didn’t just pick a pen, and draw a big U shape on the paper to create Mordor, but he did a more difficult job: he “found” his Mordor. And in a time when there was no internet, no Google, and no Google maps, that was an admirable undertaking!

When I found a U-shaped mountain, exactly at the east- west and not at north- south direction, with a circle-shaped mountain exactly at the north-west corner as in Professor Tolkien’s maps, I wondered if I stumbled upon something the Professor pondered over while gazing at Far East maps. Then I noticed a river on the west side of those mountains, flowing exactly the same direction where the great Anduin River goes. And just like the Anduin, it reaches a gulf in the shape of a semi-circle, and there is an island the same shape and size as Tolfalas on Middle-earth maps. That precise mix of geographical phenomena from our world makes it clear that this is not an accident. Now we have to ask why Tolkien put those similarities to our world in his Middle-earth maps. It makes the most sense to conclude that the good professor wanted those details and similarities to be seen. Perhaps this is one underlying reason we Tolkien geeks love his maps as much as we love his stories.

By the way, finding a circle-shaped mountain is not a usual find: you cannot find any other in our world!

Let’s now go back to the “Great River” to see something interesting. This wonderful shape is where the mighty Anduin River reaches the sea. 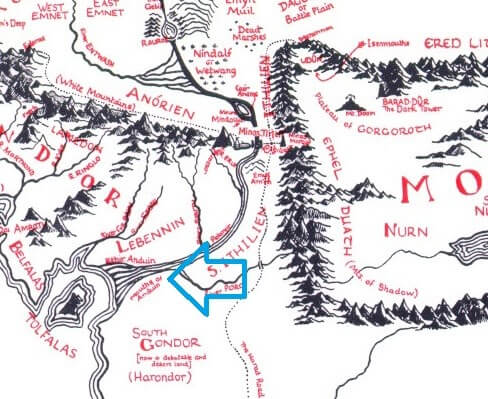 What Tolkien called the Ethir Anduin literally means “Mouths of Anduin.” As you can see by looking at the Middle-earth maps ahead, the Anduin is different from the other rivers as they reach the sea: none of those rivers have such a shape when they reach the sea. The later Middle-earth maps redrawn by Christopher Tolkien show that the Anduin divides into several branches before reaching the sea. In the original Pauline Baynes illustration, there is no dividing and the Anduin, just like the other rivers reaches to the sea with a triangle mouth. Apparently, Baynes mistook Professor Tolkien’s lines and drew contour lines instead of a divided river. But these are not contour lines because if these lines were showing the form of the water, they would have to be drawn like this, like all the other rivers of Middle-earth when reach to the sea: 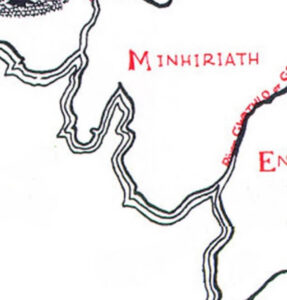 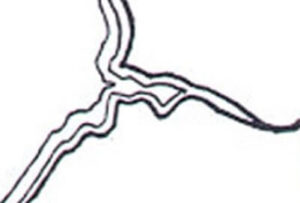 Or even like the mouth of the combined rivers Serni and Gilrain just beside it: 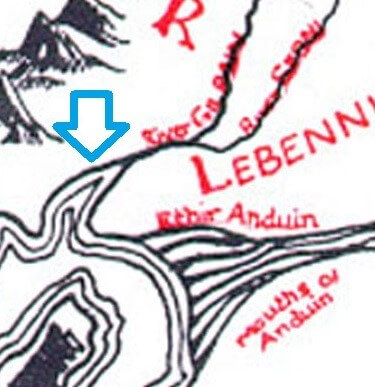 When rivers reach the sea, contour lines go into the river’s mouth and are shaped like a triangle. If the Anduin were not divided, it should have this shape: However, the Ethir Anduin is not like this and the contour lines of the river suddenly cut when meeting the sea, and do not go into the mouth, which shows that these are not the river’s contour line and that Anduin is, in fact, divided here. Fortunately, Christopher Tolkien redrew the Middle-earth Third Age map for a 2005 reprinting of Unfinished Tales, and added and corrected some points in the General Map. One of the main corrections of these maps is the exact drawing of contour lines. 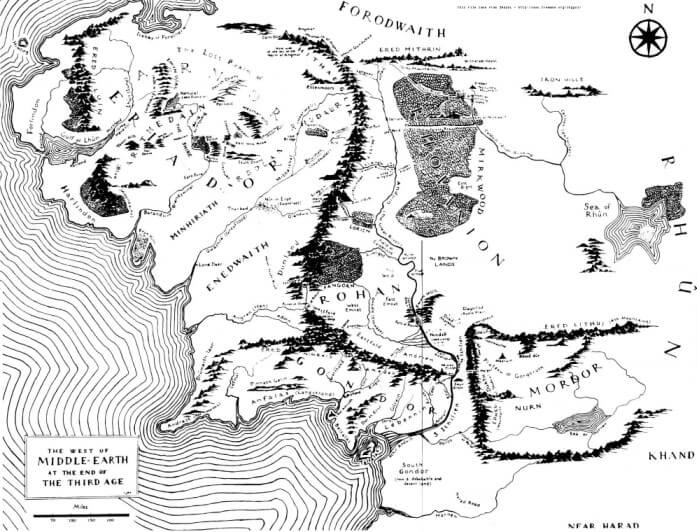 Now that we have the corrected map to look at, let’s now wonder why Professor Tolkien deliberately drew the Anduin River divided like this in its unique way. Since we found a unique circle-shaped mountain in our world, let’s take a look at the mighty Indus River beside it. Here is the big picture, but we need either eagle eyes or the zoom feature of Google Maps to make much of it. 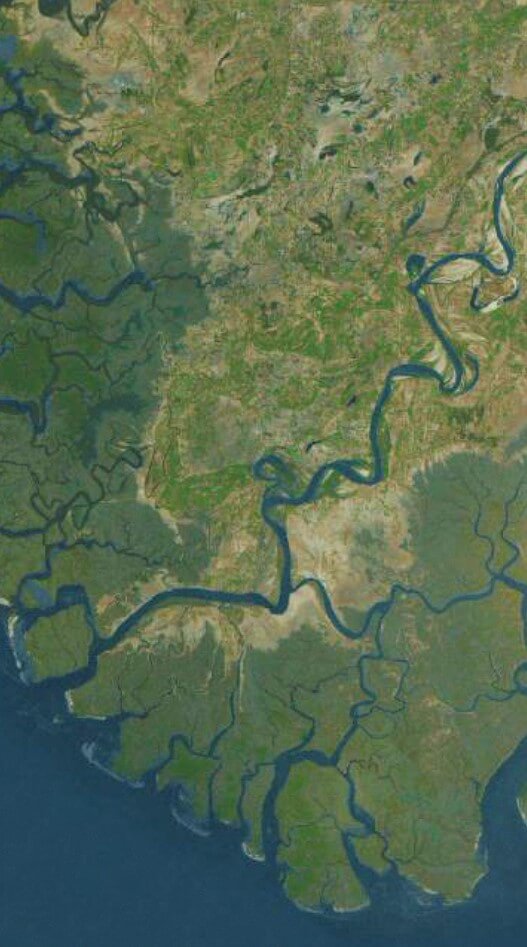 This shows the Indus divided into branches in its mouth. Of course, when you zoom in enough to see the branches, the coasts of the near lands cannot fit into the picture. Why is the Indus suddenly divided in this place instead of going straight into the sea? Let’s zoom in more. 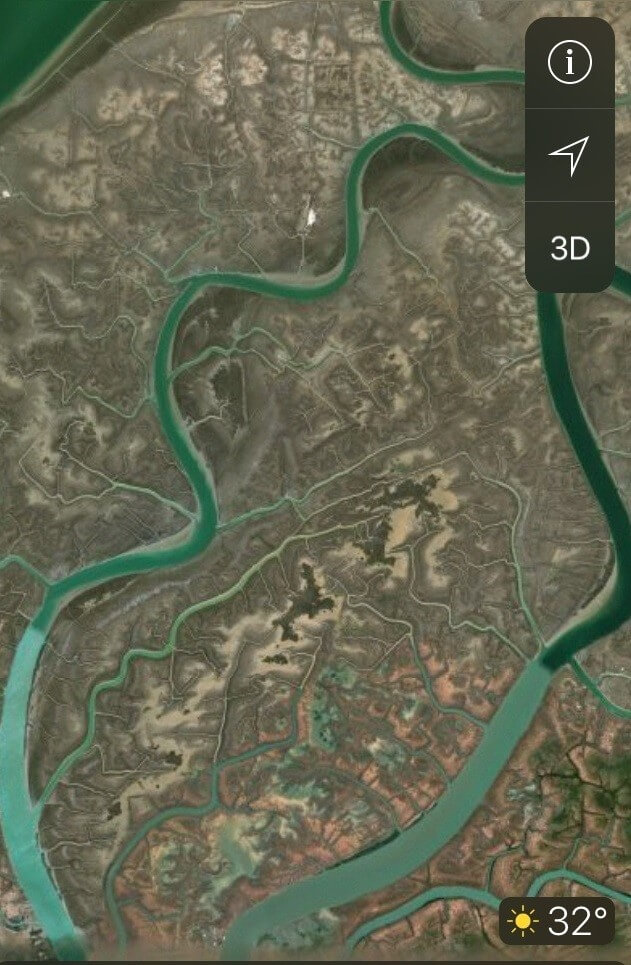 What we can see in this picture is the Indus not just divided into several branches, but into a multitude of branches! Let’s use Google Map’s archives to see pictures taken by local photographers of the area to find out what is really happening here. 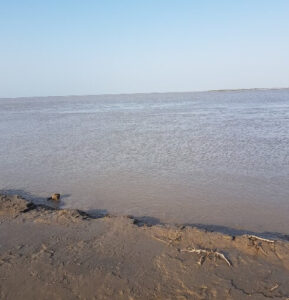 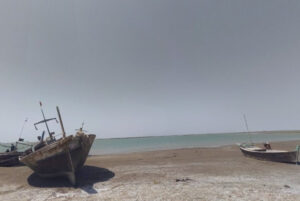 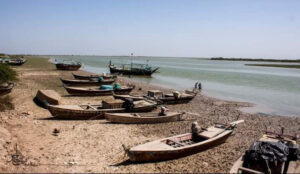 As you can see, this place is a wide and low-sloped coastal land. In steep areas, rivers run faster and more concentrated with lesser width, but when a river reaches wider and lower areas like here, it slows and spreads in a wide form. In sub-humid areas like here, where lands are made of muds gathered from a river’s alluvium, the river will naturally divide into branches and continue its way with the same shape until reaches steep or stony lands. The reason the Indus River mouth is full of mud is that its main headwaters come from the Himalaya Mountains carrying great quantities of alluvium. In the pictures above and in satellite pictures, it is easy to see that the river’s color is mostly brown, which shows the amount of alluvium in it. Therefore, in the lands near the river mouth, with lower slope and lower speed of water, all that alluvium settles down and gradually forms a huge muddy land. The combination of all those factors–the low slope and wide muddy lands–make the Indus divide into several branches.

Of course Tolkien didn’t access satellite pictures and Google Maps. What of this phenomena is shown in the maps of his time? This is a picture of the same area at the beginning of the 20th century: 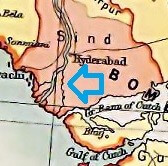 Here is a particularly beautiful map of from the 19th century that is similar to Professor Tolkien’s map: 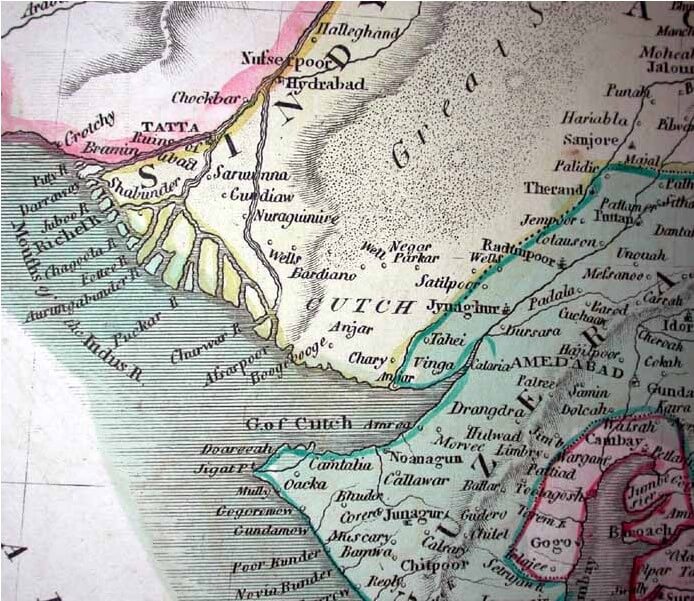 The Indus River’s divided shape is clearly seen in these maps. Now our map becomes more complete, and like the picture below, it resembles the Middle-earth Third Age map: 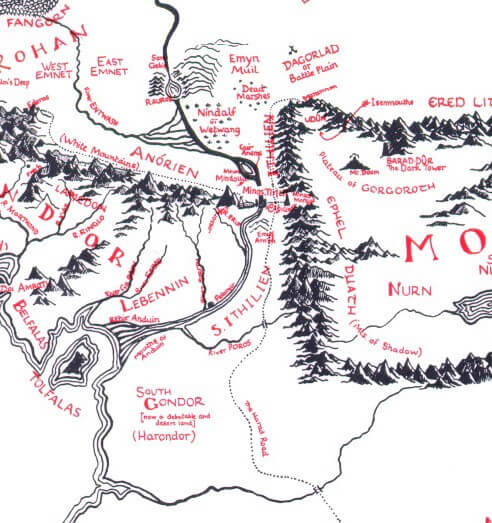 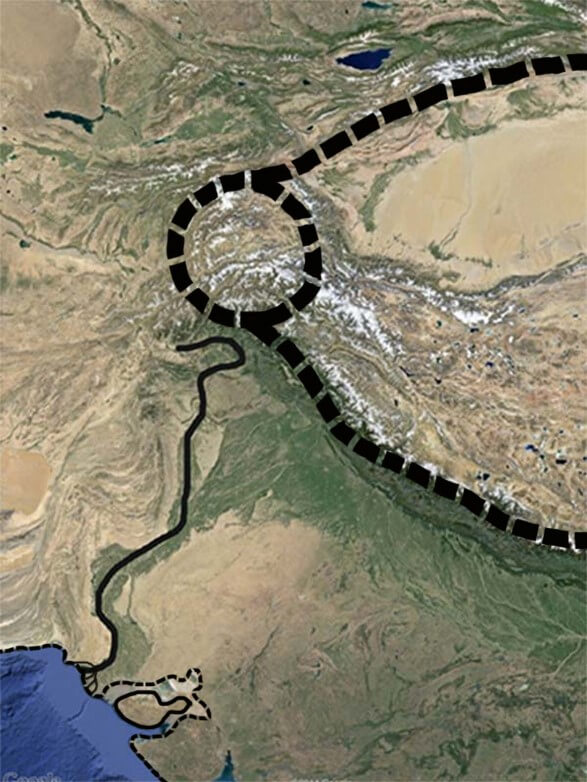 These maps are so similar, I think it is impossible that these similarities are mere accidents. I think it is obvious that Professor Tolkien put this branched shape of the Indus River mouth into his maps on purpose. The reason he drew the Anduin River like he did is that the Indus River has the same shape there. Otherwise, for what specific reason did he insist on drawing the Anduin’s mouth like this? How did it advance his story? Doesn’t it make more sense to view it as a hint for us to see the amazing similarities between the maps and help us be sure we found the right place? Maybe Mordor has a U shape to keep enemies from entering, but what about all the other details surrounding it? What is the use of all of these rivers and islands and all of these formal similarities? Doesn’t it apparently mean that Professor Tolkien’s surprises didn’t end with his unique and amazing stories, and doesn’t it look like he invited us to a riddle game?